Going Beyond Hermann von Helmholtz: The Octave Illusion with Respect to Handedness


Introduction
The octave illusion was initially produced by the stimulus configuration that is depicted in Figure 1a. Here there two tones that are spaced an octave apart, which are then repeated in alternation. This sequence was presented to both ears simultaneously, however, when the right ear received the high tone, the left ear received the low tone and vice versa with each ear receiving opposite tones. This presents the listener with a single continuous two-tone chord, but the ear in which each input is received switches repeatedly (Deutsch, 1981).
This sequence provokes various illusions. The most common illusion that arises from this sequence is illustrated in Figure 1b. This shows a single tone switched from ear to ear, whose pitch simultaneously switched back and forth from high to low. Thus, the listeners heard a single high tone in one ear, which alternated with a single low tone in the other ear (Deutsch, 1981). 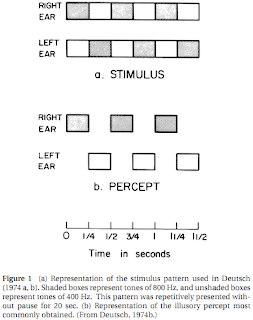 The illusion is tried further when various subjects attempt to alter the ear in which the high and low tones are perceived by simply reversing the headphones. Most people still hear exactly the same thing; that is, the tone that was received in the right ear is still perceived in the right ear and the tone that was received in the left ear is still perceived in the left ear. The listener originally associated the difference in right versus left ear perception to the earphone, but the reversal of the headphones proves to the listener that it is not the headphones, but indeed the ears that perceive the different tones. This percept is illustrated in Figure 2. Figure 2 provides a written report by someone with absolute pitch (Deutsch, 1981). 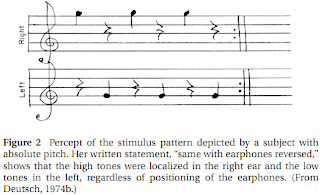 The octave illusion was shown to be based on two factors: (1) the perception of the frequencies presented to a single ear (those presented to the other ear being suppressed), and (2) the localization of each tone to the ear receiving the high frequency signal. This is regardless to whether the higher or lower frequency was actually perceived (Deutsch, 1974). More recently, the octave illusion is explained on the foundation of selective attention.

Selective attention is expressed as the ability to selectively attend to certain stimulus; blocking out unimportant stimulus. Selective attention also explains how an individual in a room full of people can focus on only one conversation. The auditory system contains many centrifugal pathways, which extend from the auditory cortex, Brodmann’s areas 41 and 42 (Andorn, 1989), through the medial geniculate body, colliculi, olivary regions, and back to cochlea. Some of these structures are proposed to play a role in selective attention by modulating midbrain and auditory nerve responses or possibly the activity of the cochlear hair cells (Chambers, 2002).

In general, it was found that among the right-handers who obtained the percept that there was a single high tone in one ear, which alternated with a single low tone in the other ear, had a highly significant tendency to hear the higher tone on the right and the lower tone on the left. This observation did not hold true for left-handers (Deutsch, 1974). This is in accordance with the literature showing that although most right-handers have clear left-hemisphere dominance, the pattern of cerebral dominance among left-handers varies considerably (Deutsch, 2009). This helps explain why the proportion of listeners obtaining complex percepts was much higher in left-handers than in the right-handers (Deutsch, 1981). Furthermore, these results are consistent with neurological evidence.

Neurological evidence suggests that the majority of right-handers are left-hemisphere dominant; meaning their speech is represented in the left cerebral hemisphere. However, this is only true for approximately two-thirds of left-handers as opposed to the overwhelming majority of right-handers. The remaining one-third are right-hemisphere dominant, which means that although most left-handers have speech represented in the left cerebral hemisphere, a substantial amount of left-handers have speech in both hemispheres (Deutsch, 1981). The variation of the hemispheres may help account for the variation of tone localization that can be present in some left-handed populations. Since the brain exhibits contralateral tendencies, it would come as no surprise that right-handers would tend to strongly follow the information presented to their right side (the auditory cortex is on the left side of the brain; right-handed people have stronger pathways to the left hemisphere because of their right-handed dominance to the contralateral left hemisphere) (Deutsch, 1981).

The result of a substantial right-ear advantage for a sequence that is nonverbal is seemingly contradictory according to the widely held belief that the dominant hemisphere is used for verbal functions, while the non-dominant hemisphere is used for nonverbal or musical functions. Left-ear advantages have been obtained in dichotic listening tasks involving musical composition. Thus, it would then be the left ear that would perceive the higher tone in the sequence. Although, a left-ear dominance has been obtained for nonverbal sequences, right-ear advantages have also been obtained. It was found that when subjects were required to recognize two frequencies, dichotically, the ear advantage was purely right (Deutsch, 1981).

The current research was performed on 51 undergraduate students of varying degree study programs at the University of Michigan. Of the students that underwent the research, 28 students were female (54.9%) and 23 students were male (45.1%). The ages varied within a range of six years. The minimum age of the students was 17 with a maximum age of 22 and a mean of 19.08 years of age, with a standard deviation of 1.354 years. For a further breakdown of the ages of the participants please see Appendix A, Table 1. 32 of the 51 students were right handed (62.7%), 16 were left handed (31.4%) and 3 students were assessed as both handed (5.9%). Handed was assessed by the questionnaire in Table 1 (Varney, 1975). Answering eight or more in either the left or right category designated a participant to that respective category. Less than eight selections in either the left or right category alone designated a participant to both handed. 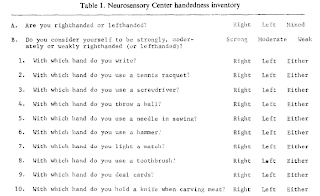 Each subject was tested individually. They were explained that they would hear a sequence of tones that would repeat. Upon the conclusion of the tones they were asked to indicate on a forced choice questionnaire which description best fit their perception of the tone(s), they had just heard (Deutsch, 1981).

The set-up for the testing was quite simple. JVC Gumy Ear Bud Headphones, HA-F150A stereo speaker headphones, with a frequency response of 16-20,000 Hz (JVC, 2010), was plugged into a MacBook Pro. The tone sequence was accessed and played back for the participant from an online source (Philomel Records). The tone consisted of an alternating pattern of 400 (G4) and 800 (G5) Hz (Deutsch, 1974). The clip was 30 seconds in length.

Screen Shot of the embedded music that the participants listened to.

All data and statistics were processed by PASW, Predictive Analytics SoftWare, SPSS, Statistical Package for the Social Sciences, 18.0.

In general the results of the subjects from this experiment correlated well with those of previously published results. The majority of right-handed subjects responded by perceiving a high tone on the right alternating with a low tone on the left, while the results of the left-handed indicated that the majority of the left-handed subjects perceived a high tone on the left alternating with a low tone on the right. The most substantial difference between these results and previously published studies include the lack of variation within the left-handed participants. According to published findings, the perception of left-handed people should be more varied. The lack of variance in this current study can be attributed to a small sample size.

Additionally, the demographic statistics proved interesting. According to the data, musical training does not affect the tone that is perceived. Again, this could be attributed either to a lack of a relationship or a small sample size. To efficiently test this, a larger sample size is needed of both musically and non-musically trained participants that are equally divided with left- and right- handed subjects.

Overall, this research should be completed with more subjects that equally represent the left- and right-handed population. This would improve the sample and should, in theory, provide data that is more representative of the population.

Ages of the participants

Whether the participant had musical training (Y=Yes, N=No) with respect to the right-handed participants.

Whether the participant had musical training (Y=Yes, N=No) with respect to the left-handed participants.

Email ThisBlogThis!Share to TwitterShare to FacebookShare to Pinterest
Labels: Helmholtz